Editor-in-Chief Editorial: Why we shouldn’t read the Bible in AP English Literature 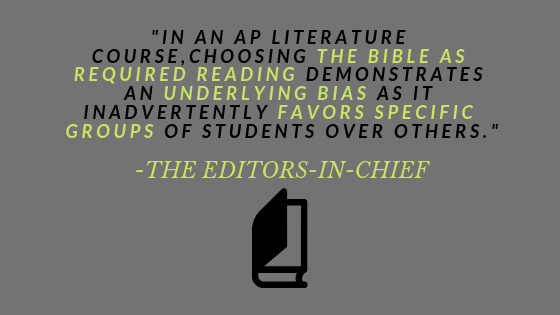 This article was originally featured in the Oct. 19 print edition of The Hawk Talk.

The First Amendment of the United States Constitution prohibits Congress from establishing a state religion, but nowhere does it mention a specific “separation of church and state.” The phrase was coined by founding fathers James Madison and Thomas Jefferson in the years following the ratification of the Constitution, and this idea has become ingrained in U.S. culture through a number of Supreme Court cases and Congressional legislation.

This year in our AP English Literature class, we were required to read four books of the King James Bible during the Bible and Mythology unit. Though the inclusion of the Bible in the AP English Literature curriculum is Constitutional and does not violate the First Amendment, we feel that reading it in our public school is a violation of the separation of church and state because it emphasizes Biblical religion, causing class discussions to feel stifled and uncomfortable.

The AP Literature teachers at Madison began incorporating the Bible into their curriculum 15 years ago in an effort to improve AP scores. They saw the need to bolster the students’ understanding of Biblical allusions and themes present in other works, and they felt the best way to accomplish this goal was through reading the text directly.

It should also be noted that College Board itself recommends some study of the Bible as part of the national AP English Literature curriculum. In the description for the course, College Board mentions that, “because the Bible and Greek and Roman mythology are central to much Western literature, students should have some familiarity with them.” Therefore, we understand that the inclusion of the Bible into Madison’s curriculum was not an independent decision.

Despite College Board’s recommendation, the four Editors-in-Chief have unanimously agreed that the Bible should not be taught at Madison or at any other public school.

We understand that many of the authors we study, including William Shakespeare, allude to the Bible in their works. However, this does not make it necessary to read entire books of the Bible to provide context for specific allusions. In other AP English Literature classrooms, students discuss the stories to which Shakespeare and other authors allude as they become relevant. According to our research, 12 of the 14 FCPS AP schools we contacted did not include the Bible on their reading list. We received no response from the other two AP schools that offer AP Literature.

We also understand the Bible’s historical significance. Yes, the Bible is the No. 1 best-selling book of all-time and year-after-year. Its status as a bestseller does not make it automatically appropriate to be read in school, however. While the Bible has influenced historical and current events, it is unfair to students who practice non-Biblical religions to only highlight Biblical stories without mentioning other religious texts and traditions. In an AP English Literature course, choosing the Bible as required reading demonstrates an underlying bias as it inadvertently favors specific groups of students over others. On comprehension assessments, students who have been reading the Bible for over a decade have a comparative advantage over those who are just picking it up for the first time because it is not something they believe in or was not part of their upbringing. For that reason, it is misguided to expect a completely fair baseline on these assessments.

Due to the fact that a large number of Madison students identify as Christian, we believe that studying the Bible has the potential to create tension between Christian and non-Christian students. For instance, two of the Editors-in-Chief were hesitant to speak up in class to share that they did not feel like it was appropriate to read the Bible or to share their interpretation of a passage because they feared offending other students. The Bible is too controversial a text to create the rich, intellectual discussions that are necessary in AP English Literature classrooms. Hundreds of texts are listed on College Board’s website as potential readings for the course, therefore it is unnecessary to introduce a text with the controversiality of the Bible into the classroom. According to the College Board’s course description, “Students choosing AP English Literature and Composition should be interested in studying literature of various periods and genres and using this wide reading knowledge in discussions of literary topics.” If students are afraid to speak up about their opinions regarding specific passages, the purpose of the course as outlined by College Board has been lost. In-class discussions would be more productive if another text was used in the Bible’s place, one that does not include religion.

For all of these reasons, we, the four Editors-in-Chief, believe that entire books of the Bible should not be included in any English curriculum at Madison. The department should evaluate other effective ways to include lessons on allusions to Biblical texts without requiring students to read significant portions of them. With that said, we do not intend to show any disrespect toward the text itself, its believers or the AP Literature teachers at Madison.