Gerrymandering: The defect of democracy

Gerrymandering has skewed election results since the early American democracy, and it continues to manipulate votes. 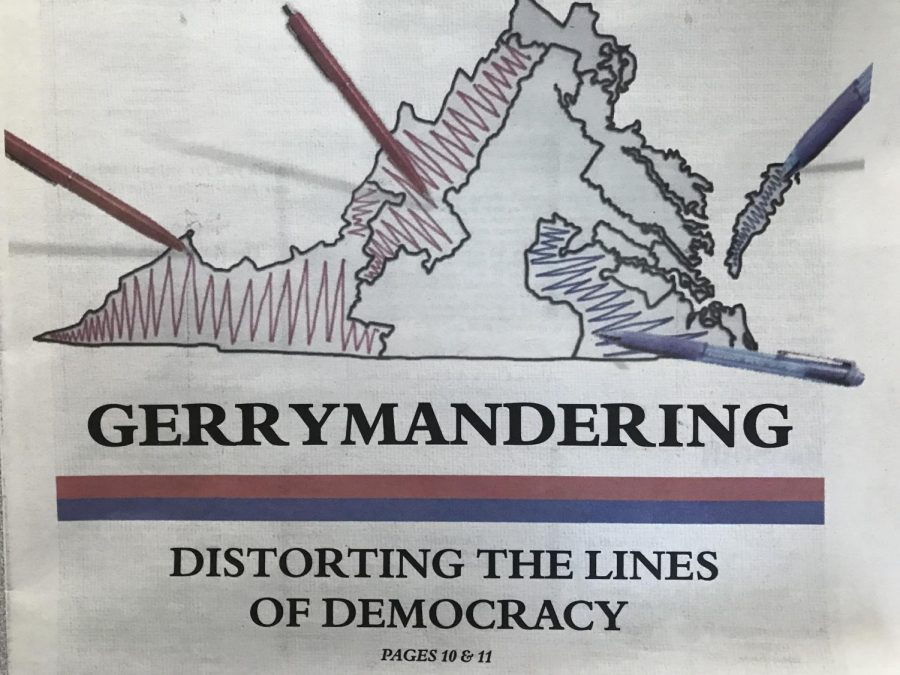 Thirteen years after his famous “Give me liberty, or give me death!” speech, Patrick Henry and his Anti-Federalist colleagues drew the boundaries of Virginia’s 5th congressional district in an attempt to keep James Madison out of the House of Representatives.

This was the first instance of gerrymandering in the United States. And while it was unsuccessful, it began a precedent of voter manipulation across the nation.

“It is a common misconception that gerrymandering is a recent issue. It’s quite frankly not,” Adam Rizzoli (’21) said. “It’s always been a negative influence on our society.”

The word “gerrymander” itself was used for the first time in the Boston Gazette in 1812, in order to refer to the redrawing of Massachusetts state senate election districts. Elbridge Gerry, the Massachusetts governor, drew his state’s senate districts in such a way that Republicans were able to control the chamber, despite the Federalists winning the overall vote. Because one district was likened to a salamander in a political cartoon, the term “gerrymander” was born.

Gerrymandering is the process by which state legislators draw legislative districts in a way that benefits their party. This would give their party more representation than would otherwise be possible with competitive districts that truly represented the voting population. They do this by drawing lines that compartmentalize voters with one specific ideology, allowing a certain party to win more seats overall.

In 37 of the 43 U.S. states with more than one congressional district, the state legislature is primarily responsible for approving the boundaries of said districts.Virginia is one of those 37 states. Alaska, Delaware, Montana, North Dakota, South Dakota, Vermont and Wyoming only have one congressional district due to their small populations, and thus cannot redraw their district lines.

The impact of gerrymandering

At the state level, in the Virginia General Assembly, the gerrymandering that exists focuses more on protecting incumbents than it does helping party politics.

As noted by Brian Cannon, the Executive Director at OneVirginia2021, an anti-gerrymandering advocacy group, all 122 state legislative incumbents who ran for re-election in 2015 ultimately went on to win.

“When Democrats took back the [Virginia] Senate in 2011, the Senate was gerrymandered by Democrats, while the Republicans gerrymandered the House [of Delegates] that they controlled. They both passed each other’s maps in exchange for safe passage of their own,” Cannon said. “So it was an incumbent protection plan back then, and that’s why it worked so well.”

Gerrymandering, though, creates non-competitive elections on a national scale.

“There are 435 seats in Congress. In any given year—this is a pretty abnormal year for all sorts of reasons—about 400 of them are considered non-competitive,” Cannon said. “And if you look at where those few districts that are competitive are coming from, they’re coming disproportionally from states that have redistricting reform, like Florida, Iowa and California.”

Thus, gerrymandering for state legislatures can often have unforeseen circumstances in the House of Representatives.

“Unfortunately, a gerrymandered state legislature in our country then translates into those people doing hyper-partisan gerrymandering for the congressional districts,” Cannon said.

Gerrymandering in Virginia is still as problematic now as it was in 1788.

In 2011, Governor Bob McDonnell (R) established an independent commission that could recommend congressional boundaries to the Virginia General Assembly, but the legislature was not bound to these recommendations. They still have the final say on all redistricting matters.

Two recent Federal Court cases, Wittman v. Personhuballah (2016) and Bethune Hill v. Virginia State Board of Elections (2017) have changed how Virginia’s maps have looked at both the national and state level.

Political and racial gerrymandering, while reversed in select cases through these decisions, is still to able to persist, as no changes to the process of drawing district lines has been made. However, Virginia lawmakers have tried to introduce new legislation that would revise the process of creating districts and end gerrymandering.

For example, Virginia State Delegate Mark Keam (D-35) introduced a bill during the 2018 Virginia House session to add “competitiveness” to the list of factors to be considered when drawing congressional and state legislative districts. It was not met with success.

“Unfortunately, neither my bill nor any other bill that would have added stricter standards or objectivity to the redistricting process passed a House committee which is controlled by the Republican majority,” Keam said.  “I support any efforts to take political consideration out of the redistricting process, including having the lines drawn by independent nonpartisan commissions organized outside of the legislative branch.”

Still, the court-mandated redistricting in the 2016 Wittman case influenced the results of Virginia’s 2018 elections.

The court-mandated redistricting may have played a role in the flipping of Virginia’s southern districts from Republican to Democrat over the last two election cycles. In the 7th district, Dave Brat was the first Republican to lose the district in 38 years.

Lauren Bell, a political science professor at Randolph-Macon College, told The Washington Post that Brat “never took the time to get to know his new district after the 2016 redistricting.” Republicans lost their Virginia stronghold in part due to the blue wave across the country, but it’s hard to ignore the impacts of the redistricting.

Nationwide, Democrats will win about 53 percent of the total House popular vote and claim a projected 235 of the 435 seats, or about 54 percent.

Despite this seemingly even breakdown between true vote percentage and seat breakdown, Keam believes that this represented an anomaly, not necessarily progress made against gerrymandering.

“It is hard to gauge the effects of gerrymandering on this year’s elections because the turnout was extremely high compared to other midterm elections,” Keam said. “Many U.S. House districts results were unusual compared to previous years.  Because of the president’s continuing unpopularity, Democratic voters were extremely motivated while Republican voters were not as enthusiastic, which led to nearly 40 House seats flipping from Republican to Democratic control.”

Keam still believes, however, that if this election was “more typical,” the impacts of gerrymandering would still have been apparent. For this reason, even with the change in House leadership, many still hope to stop gerrymandering for good.

Cannon, for one, is a leader in ending gerrymandering in the state of Virginia through his OneVirginia2021 organization.

OneVirginia2021 hopes to pass an amendment to Virginia’s Constitution that accomplishes three goals: add transparency to the redistricting process, protect communities instead of incumbent politicians and establish an independent group drawing the maps rather than the politicians themselves. This, Cannon said, will allow the Virginia voters to truly have representatives who support their interests, despite potentially not fostering perfectly competitive elections.

Despite the lengthy process that must be taken in order to amend Virginia’s Constitution, which includes passing both houses of the General Assembly twice and a statewide referendum, Cannon is confident in his organization’s odds of success.

“We do have good supporters on both sides of the aisle,” Cannon said. “I think we have the best chance we’ve ever had. More and more people are [becoming] aware of this issue.”

Though Cannon says that more people are becoming aware of this issue, Keam still hopes for a continued push.

“I believe it is critical that voters demand such change and continue to advocate for it strongly so that elected officials like me will make this reform a priority,” Keam said.

An added benefit to anti-gerrymandering legislation could even be an increase in political participation, according to Government teacher Frank Franz.

“I think people would actually vote more,” Franz said. “Right now, some Congressional districts are just so gerrymandered—depending on what political party you are—you might just determine that your vote doesn’t count because we’re so blue or so red.”

Progress is already being made across the country to eliminate gerrymandering. Five states have voted this year to pass anti-gerrymandering legislation through voter referendums: Missouri, Michigan, Colorado, Ohio and Utah.

“Every time we let politicians draw these districts themselves, they rob us as voters from our genuine choice at the polls,” Cannon said. “If you wonder about the disconnect between our representatives and our people, that’s directly attributable to gerrymandering. It’s not the issue that you need to care about the most—there are certainly more pressing issues—but because of its effect on all those issues we care about, gerrymandering is the issue that we have to care about first.”